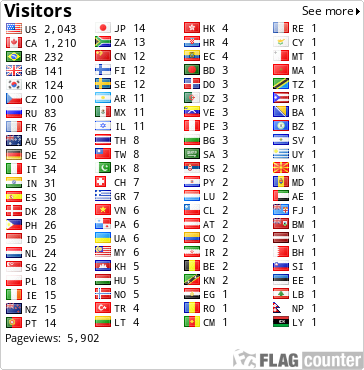 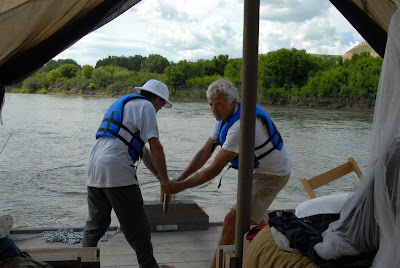 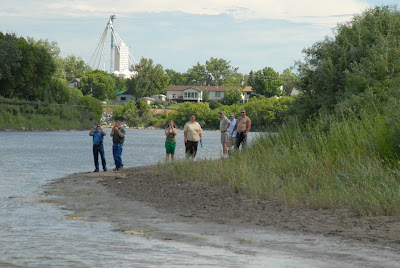 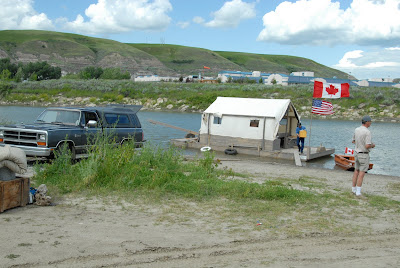 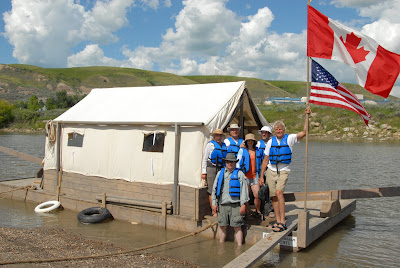 The scow was pulled out of the river at Newcastle Beach in Drumheller late in the afternoon. It is now in storage on a farm in Consort, Alberta with plans to try again next year. Next year we will use larger crews at all times- this way we can get the scow off rocks when it is stuck on one. We will also explore some system (inflatable?) to lift the scow off rocks. Thin steel on the bottom will no doubt help slide over protruding rocks. Also considering bringing a support boat with a powerful motor for towing us off rocks when needed, taking crews off of the scow to field areas where the scow cannot stop, and scouting in advance for rocks, areas to stop scow, etc. Of historical interest is that where the scow beached is the site of the Charles H. Sternberg (and sons Charles M. and Levi) fieldcamp of 1912.

Philip J. Currie and Eva Koppelhus submitted this paragraph about their trip down the river today:

The final day of the incredible voyage began as the scow was pushed off its muddy dock at 7:15 AM. As on the previous day, Al Rasmuson and Bill Spencer tended the front tiller, while Tom and Phil took care of the back end. This was probably the most stunning day visually, as kilometers of badlands slipped by. Everyone wanted to stop and look for fossils, but we all knew we had a deadline to dock in Drumheller. Most of the day passed uneventfully, but the wind became stronger by afternoon. It pushed the scow into the rocky left bank as we passed through some otherwise moderate rapids upstream of Nacmine. Undamaged, the vessel twisted 360 degrees through the fast waters, and continued downstream. Half an hour later, however, it ground to a stop on another gravel bar. Even with the water levels so high on the river, it took a little time to push it back into the deeper waters downstream. Some of the staff of the Tyrrell Museum came down to cheer us on as we passed the vicinity of the museum, and again as we passed the train tressle near the west end of Drumheller. The trip was almost over, and in spite of fighting the wind as it pushed the scow back and forth across the channel, it had been a fairly easy day. As we approached Newcastle Beach, Phil and Eva remembered the rapids at the foot of 12 Street, close to their former home in Drumheller. Everyone was up for one last fight to get through, but we found the channel by the right bank and slipped through without any problems. As planned, the scow pulled into shore at 3:45, some thirty kilometers after departing the Morrin Bridge campground. There were many hands to assist us to unpack; and a truck with a crane from Dan's Oilfield Services was there to lift the scow out of the water. Lawrence Dohy (DRI) drove Al and Bill back to Calgary, while Tom and Tess dropped Eva and Phil off at their field camp in Dry Island Buffalo Jump Provincial Park. It had been an amazing journey, and the crew was unanimous in their determination to do it again next year at a more leisurely pace!
The pictures today were provided by Phil and Eva.
Posted by Darren Tanke at 5:12 PM 28 comments:

While Darren was recovering from his medical incident of July 4th, the scow was moved from Dry Island Buffalo Jump Provincial Park to near the Morrin Bridge- a distance of some 39 km. It stopped for the night less than a kilometer upstream from where the American Museum of Natural History scow "Mary Jane" (used 1910-1912) was beached and abandoned after the 1912 field season.

On Tuesday, July 6, 2010, the scow easily slid off the mud into the current of the Red Deer at 9:15 AM. Eva, Tom and Phil were still on board, but had been joined by Allan Rasmuson (Dinosaur Research Institute) and Bill Spencer (DRI as well) both from Calgary, and Tom's daughter Tess Owen from Edmonton. The wind cooperated, pushing steadily from behind, as the scow covered more than 40 kilometres at a blistering average speed of 4.2 km per hour. For a change, the great blue herons outnumbered the pelicans, and a mature bald eagle crossed our bow late in the afternoon. All would have been fine if Tom and Phil had not commented independently that the trip had been so smooth that nobody had got wet and muddy. Sure enough, shortly after, the scow ground to a halt on a gravel bar that spanned the river and connected two islands with each other and both banks. Lightened by the weight of three of the men, it was a relatively easy task to push the multi-ton vessel across the crest of the bar and back into the current. As planned, the expedition arrived more or less on time at 7 PM at the Morrin Bridge campground to meet Darren and Patty for Bar-B-Qued steaks and as assortment of side dishes. Eva and Phil enjoyed a quiet night on the scow (interrupted only by a short rain shower and the periodic slapping of beaver tails on the river) as the others slept in the tents in the campground.
Posted by Darren Tanke at 5:11 PM 5 comments:

After Darren's medical incident of July 4th, a small crew stayed with the scow and guarded it today, leaving for points downstream on July 6th.
Posted by Darren Tanke at 5:11 PM 7 comments:

This was not a good day for your blogger. I have been dizzy for several weeks and quite stressed out during the trip. This morning I was hiking to a higher spot in order to update this blog when I felt my health declining rapidly. I was alone in the badlands and staggering along like a drunken man, with my head very dizzy and not thinking properly. I saw some vehicles heading for the day use area in the Dry Island Park, and knowing I needed medical help, headed that way. I approached a group of hikers getting ready to set out. As I reached the first person, I gather I collapsed into some tall grass. Don't remember much after that, but it resulted in an ambulance being called and me being rushed to the Three Hills Hospital. This effectively ended my involvement in the scow trip and shortened it considerably. Blood tests revealed low potassium levels and low hemoglobin so I was anemic. That and the stress and exhaustion of the trip combined to bring me down. I am typing these words on July 8th and am still afflicted with exhaustion and dizzy spells- it really is an effort to write this.

There are plans underway to try the scow trip next summer.
Posted by Darren Tanke at 5:11 PM 1 comment: 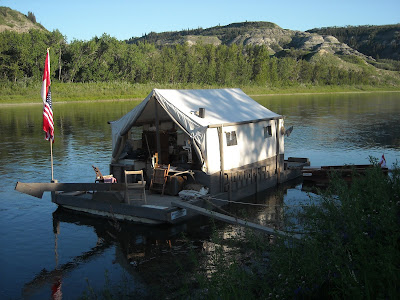 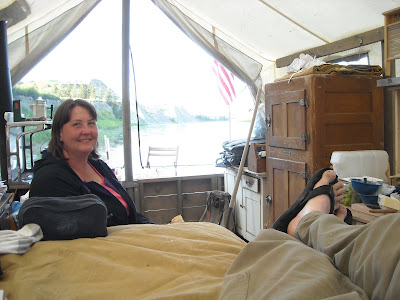 We left McKenzie Crossing this morning, making 12 more kilometers and managed to avoid getting stuck on submerged rocks. McKenzie Crossing is where secondary highway 590 crosses the Red Deer River. We floated down to Dry Island Buffalo Jump Provincial Park and then Philip Currie and I guided the scow onto the exact spot where Barnum Brown had his scow anchored in 1910. We had to dodge a few rocks as we landed and then of all things- a submerged shopping cart! After landing we set up a canvas tent on the site of Brown's camp in 1910, then Patty and I donned period clothes for some historical re-enactment pictures- I will post some of them later. We had a number of visitors including the scows carpenter Perry and his wife Alice. The pictures and video clip here were taken on the exact spot of Barnum Browns scow camp in 1910- an idyllic scene and satisfying after all the work to get here. We were serenaded by Coyotes (Canis latrans) tonight and then in the early hours an obviously displeased beaver (Castor canadensis) sharply slapped his/her tail into the water close to the scow waking us.
Posted by Darren Tanke at 5:10 PM 4 comments: 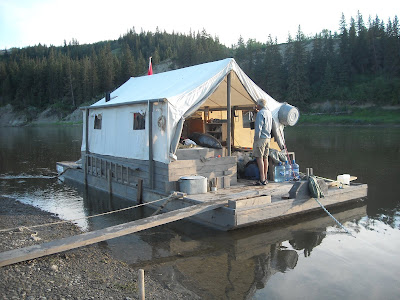 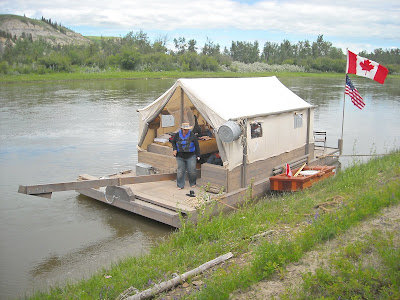 Morning of July 2 here now. We got the scow pulled off the big rock. It was a tricky lift for the crane crew but they got the job done. We drove east and are now at Content Bridge where highway 21 crosses the Red Deer. Here and below the river is very placid without rapids and moves at about walking speed so will be less technically challenging. We will be going to Dry Island Buffalo Jump Provincial Park over the next two days. Mosquitoes dreadful here. Nice and sunny and looks like a great day for a float.
On July 2nd we floated some 39 kilometres to McKenzie Crossing. We got stuck on gravel bars or rocks 6 times and were very lucky in two cases to have help. In the first case 8 kayakers pushed us off a gravel bar on which we were firmly stuck. In the second case, we got stuck mid-river in fast water at Trenville Park while dozens of tourists watched. Lucky for us, several young men jumped into the river and after much effort got us going again! When the scow works it works great, but when we have problems with rocks it creates a serious situation. However we did make excellent progress today.
Posted by Darren Tanke at 6:17 AM 10 comments: